It was a wet and windy day here as storm Eunice passed through. We watched the trees in the park sway and the fallen leaves blowing around but fortunately have no damage to report. Some people in the village are without power but we kept ours - just as well as although we have plenty of candles and a gas hob my planning had not stretched to buying matches or a lighter! So I lit a candle from the hob when I got up and kept it burning all day, just in case.

We spent the day unpacking the last of the boxes ( which contained pictures), sorting through all our pictures and hanging as many as we could on the walls.

I spent an hour in the afternoon working on a picture of a great tit with watercolour pencils which I think is just passable. 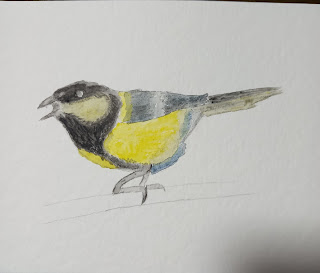 It is my third attempt at this little bird and it is time to move on - I have a cute little blue tit to work on next. I was a lot happier with these crab apples which I worked on earlier in the week. 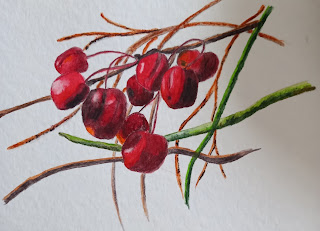 I had planned to complete my lacy sock during the evening but didn,t quite have time before Death in Paradise followed by a couple of episodes of a new series we are catching up on called Hidden.

Anyway, here is my almost sock 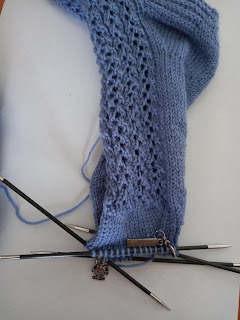 and as I think I mentioned in my last post, a picture of my best ever heel turn! It was good to be working along with my other FNSI friends again and many thanks to Wendy for getting us all together again.

Good to be joining in with Cheryll and friends again for a Friday sew in. Thank you Cheryll.

It was a beautiful sunny morning so we took a drive to the coast - one bonus of living in Somerset is that the sea is only a 30 minute drive away. It was blustery and cold but lovely to see the sea. 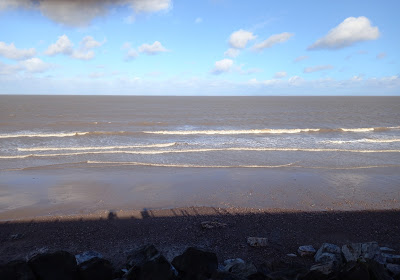 We could see the Welsh coast on the horizon clearly but sadly the camera hasn't picked it up. 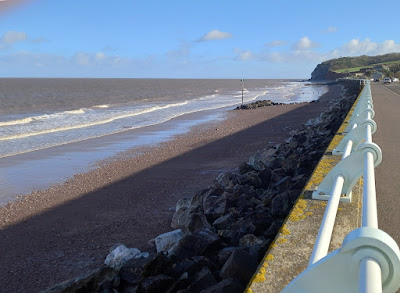 We spent the afternoon unpacking and hanging pictures but I did find time to watch the first of three videos from Design Matters TV on painting birds with watercolour pencils. I am looking forward to making a start on this just as soon as I find my pencils!

Not much to show from the evening although I did finish turning the heel on this Winwick Mum easy lace sock. So far it is looking like one of my better heel turns although at this point not easy to photograph! 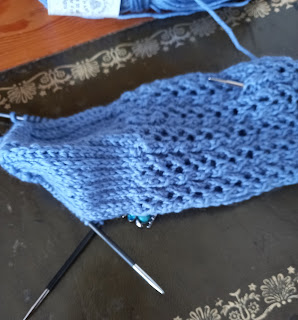 Spent the rest of the evening watching TV but it was good to be working along with everyone for at least part of the day.

Hopefully this will be my final year working on the Dresden quilt top. Here it is as I left it at the end of last year. 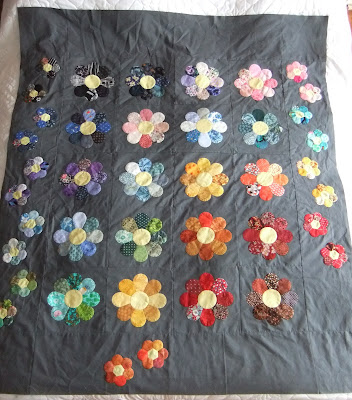 The RSC colour for this month is red and I could see from the picture that I need two red flowers to add to the border and luckily I was able to find the box of red fabrics from amongst all the unpacking. I managed to finish these yesterday evening so just squeaked in to getting them done in January. 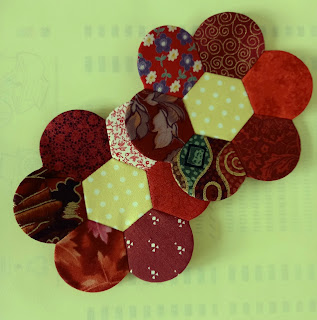 I plan to get then sewn onto the flimsy just as soon as I find some applique thread!
Posted by Lin at 14:11 18 comments: