I have finished the Autumn mini hanging so it is all ready to hang next week - although it is feeling autumnal this morning with a grey sky. We had some rain overnight but once again only just enough to wash off the dust. Anyway, back to the hanging. 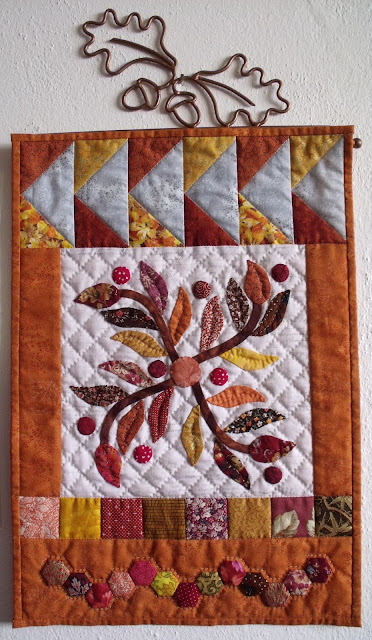 I ditch quilted by machine around my Migrating Cranes, the centre block and the little squares. Then I spent some happy time hand quilting the centre and around the hexies. 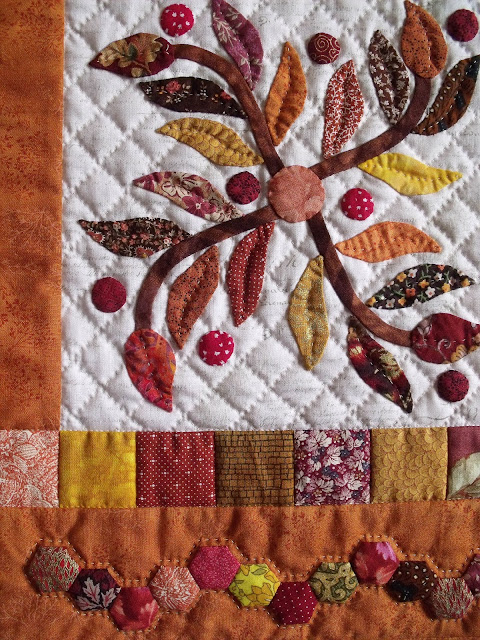 I am very pleased with how this turned out and sad though I shall be to put away my summer flowerr baskets I am looking forward to seeing this every day on my wall.

Meanwhile work continues on the tablecloth....

Hard to believe that we are over half way through August! Autumn is just around the corner and so this week I realised it was time to crack on with my Autumn wall hanging. When you last saw it, it looked like this 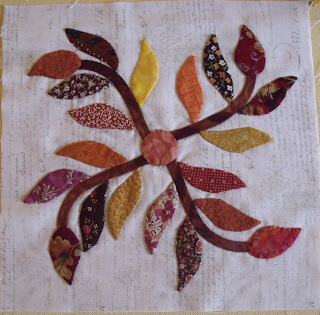 and was desperately in need of some red berries to bring it to life - which I was dreading doing! So I spent a couple of afternoons adding borders to the piece and plucking up courage to do the berries. Like all these things, in the end, they were no trouble at all once I had worked out how to do them. 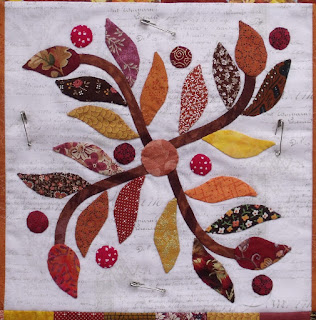 And so my task for Friday afternoon was to add a swag of 1/2" hexies to the bottom border of the quilt and layer it up ready for quilting. 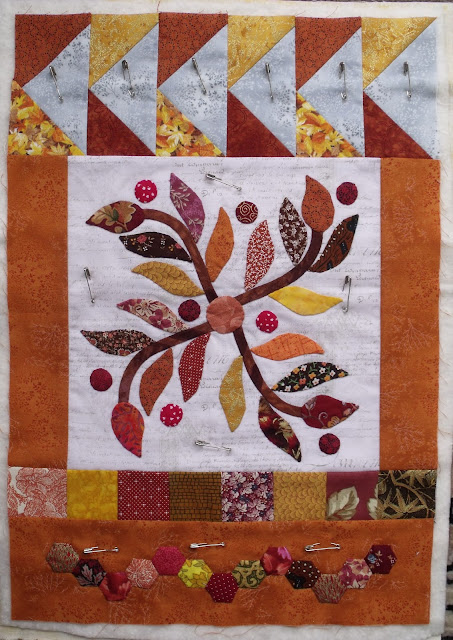 The flying geese along the top of the panel are actually migrating cranes which we see a lot of here in the autumn. I plan to do some basic ditch quilting by machine around the border and then hand quilt the applique to add some detail.

In the evening I worked on the applique on my table cloth. The basic vine and leaves are now complete on two sides and the third is nearly done. 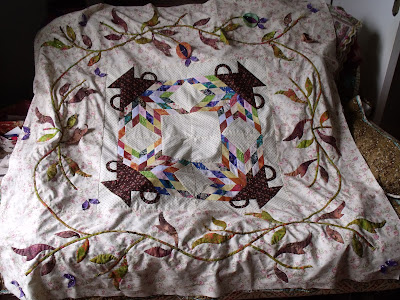 In other news I have been working on some secret Christmas stitching and have completed my purple RSC Dresden. 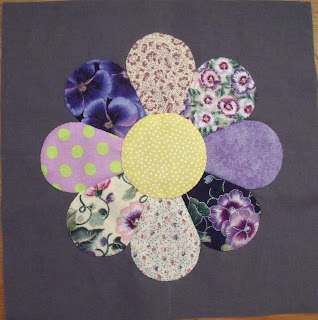 It has been hot here again with just the odd shower to wash the dust off - not enough to soak the ground though which is what we need.

So I am looking forward to seeing what everyone else was working on last night and will be round to visit soon. Enjoy the rest of your weekend.
Posted by Lin at 09:53 24 comments:

What started out as this collection of fabrics 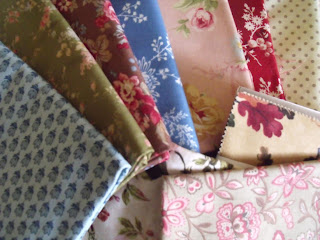 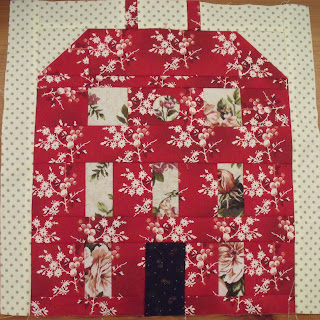 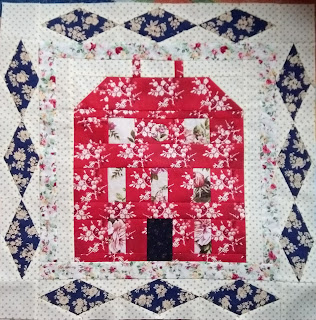 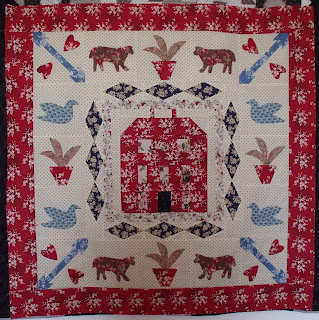 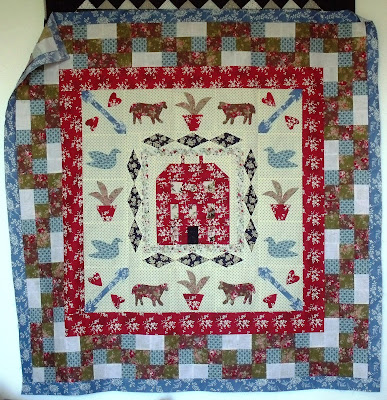 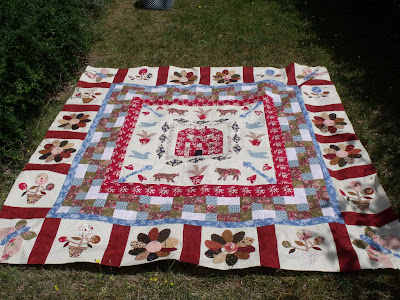 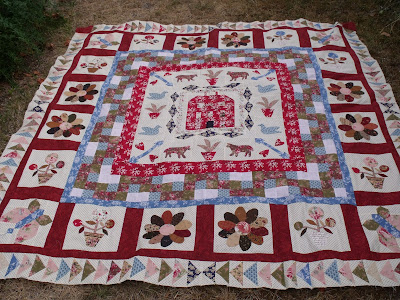 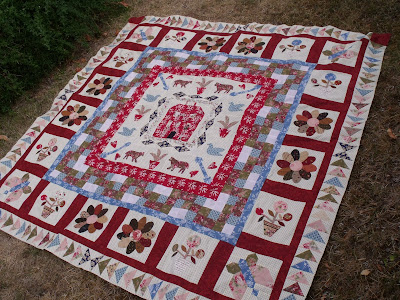 The only extra fabric I needed to buy was the red for the outer sashing.

So pleased with how this has turned out. 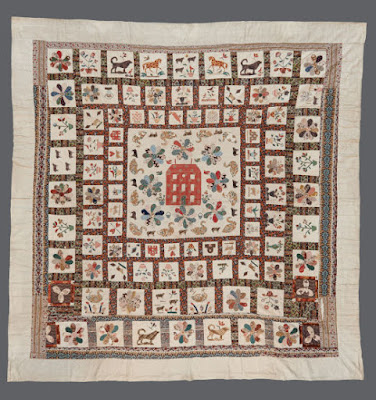 dating from 1840 - 1860 and in their collection. It has been a great project to work on and I have loved the variety of motifs and techniques. I shall definitely be making some more of those butterflies!

Now all I need is some cooler weather so that I can get it layered up and ready to quilt over the winter. It is a big quilt - 80" x 80" and is going to keep my legs nice and warm over the winter months as I work on the hand quilting.
Posted by Lin at 07:24 20 comments:

Friday Night with Friends for August

Many thanks to Cheryll for getting us all togeher again yesterday. Pop over to Cheryll's blog here to see who else took part. I shall making some visits later today.

It was 40 degrees here yesterday afternoon and so I shut up the front of the house early on and settled down to work on my Red Manor House BOM. The final part of the BOM arrived last Saturday and I have been working steadily during the week on making lots of Flying Geese. This is where I was at when I started out yesterday afternoon 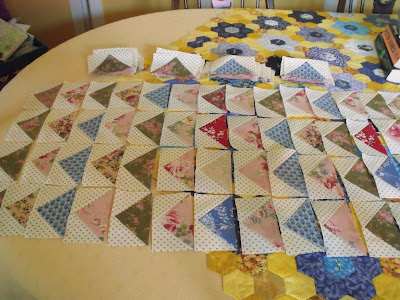 and this is where I was several hours later! 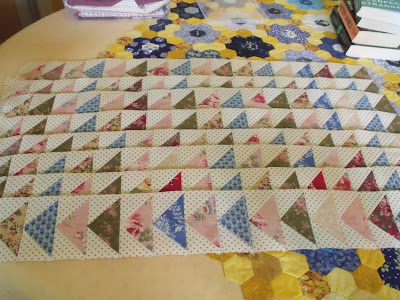 I now need to make eight dark blue Flying Geese to make the centre X at the middle of each side and then they can be added to the quilt. Not far to go now!

During the evenings I have been working on the applique on my tablecloth. The vine and basic leaves are all sewn down now along one side of my cloth. 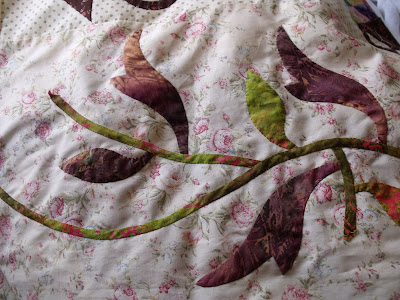 Not easy to get the lighting right but you get the idea.

Trawling through my inbox recently I came across a link to a pattern I had bought back during lockdown. No idea how I found the pattern, anyway, as it happens it was a timely find and of course I set about instantly making a Zip Up Tray Pouch

To me that looks like a pencil case whereas opened out it is 11" x 7" x 4". What I actually wanted was something square so it was quite easy to downsize the pattern so that the opened tray is 7" square.

Next problem - no opened ended zips in my stash! Never mind I thought - I will just add a tab and button, much easier than fiddling with a zip too.

To stiffen the box double sided heavyweight fusible interfacing is needed but I dont have any of that. I do however have some heavyweight pelmet vilene that is fusible on one side so I decided to go with it. Although double sided fusible would probably have made the end pieces easier to put together, I found it worked well and with the unfused side inside it means I have a looser lining which I quite like.

So here is my finished box 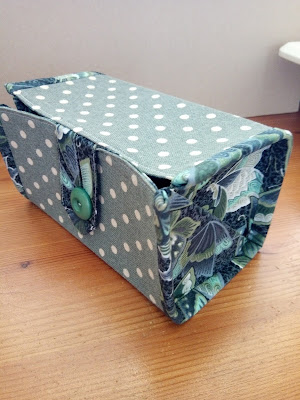 The lovely linen spot on the outside has been in my stash for some time waiting for its moment to shine! The contrasting fabric is a pretty butterfly print. 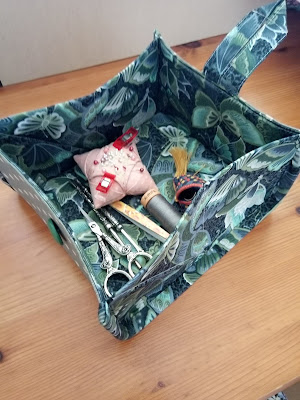 Everything went swimmingly until I got to hand stitching the binding down to the end pieces. I think it took me as long as putting the rest together! It may be that my pelmet vilene is stiffer than the suggested stiffener but I still think it would be difficult. In the end I was stab stitching through to the edge of the binding on the front of the box using tiny stitches. 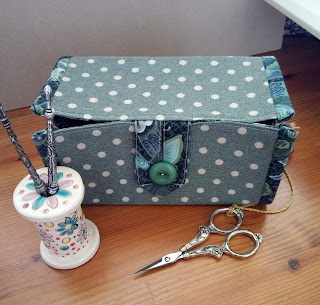 Should I ever decide to make another of these - at the moment, highly unlikely! - I would use 1/4" seams on the two ends. I find those 3/8" seams bulky. And I would used doubled over bias binding rather than her single as I think it is stronger.

Well, it is marginally cooler today. I am off to make some more Flying Geese. Have a good week.
Posted by Lin at 12:56 25 comments: