Having cooked my puddings ( and finished quilting my geese, but more about that later) it was time to get on with my Christmas cards.
The French are not really into Christmas cards! You can buy a postcard type of card - not double fold like ours - but they are not very exciting and are more likely to be sent for New Year, well at least in this neck of the woods!
So, unless we have been in the UK for Christmas when it is possible to buy cards for the following year in the sales, I make my own. Printing is quick and (I think) stylish but I have, in the past, also made small machine embroidered panels to stick onto the cards.
This year I am using a Thermofax print of holly, printed in black and gold with a 'Joyeaux Noel' stamp. 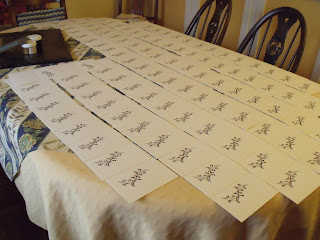 Here they all are drying out before they get their JN stamp. A good afternoons work! 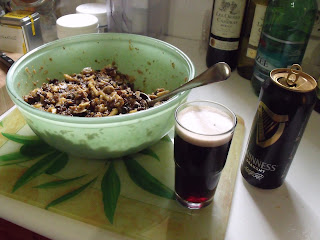 I have just mixed my Christmas pudding and am now enjoying the rest of the Guinness - a bit early in the day but it would be a shame to waste it!
Enjoy the rest of your Sunday.
Lin
Posted by Lin at 02:50 3 commentaires:

Up early this morning (after a late night at the annual bowls club do) for our weekly visit to the market. I must admit that we do not spend much money there - usually mushrooms, veg plants when in season and maybe some English sausages! No, we go to meet friends in the bar at 8am for coffee and lots of chat. The weekly ritual. The good thing is that having indulged ourselves we are usually home by 10, fit and ready for what the rest of the day has in store.
This morning as we left the house the most amazing sunrise was appearing and we enjoyed the incredible colour all the way in to Riberac.
Here are a couple of pictures I took as we left the house. 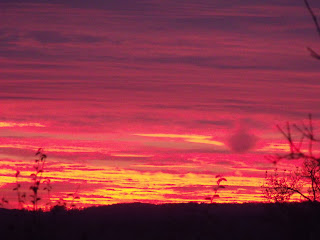 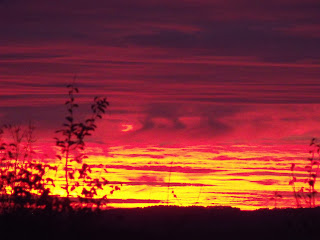 Christmas market tomorrow morning at la Pouge then it's head down on the sewing machine for the last stage of quilting on my flying geese quilt. I just wish my walking foot would stop squeaking!

Have a great weekend and thank you for reading this.

Got lots of quilting done yesterday evening. Decided to try out the Clover 'Black Gold' quilting needles that I bought at the K&S. I used the No10 which is the size I had been using on my quilt ( a betweens). The tips of my fingers on my left hand can vouch for the fact that this is a very sharp needle! However, the body of the needle felt chunkier and not so easy to pull through the fabric. When I put the two needles side by side it is obvious that the black one is much thicker - also the eye is smaller and more difficult to thread.
The blurb on the packaging says that they will not bend easily which, being much thicker, is probably true. Also that they have 'enhanced rust resistance'. I shall persevere and we shall see.
After an evening and a half of use I am finding it easier to use but I am still to be convinced that they are worth the extra cost.
Posted by Lin at 14:55 3 commentaires:

Friday Night Sew In for November!

I am joining this for the first time and plan to spend the evening cracking on with some hand quilting on a very  old UFO!
Have a good weekend all
Lin
Posted by Lin at 11:24 1 commentaire: 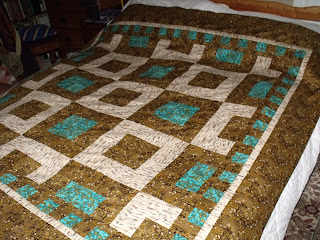 Seven weeks on and here it is! and much bigger than I had anticipated, although the outer border is wider than that in the pattern as I had plenty of fabric and I like wide outer borders. I am very pleased with it although if I was going again I would make some changes. I followed the 'advanced' instructions which gives this very solid centre with the chequerboard border. The 'beginners' instructions put sashing between the 16 blocks which gives it a more patchworky and pretty look but with a plain border. My favourite so far has been the combination of the two (everyone is sharing pictures of their completed quilt on the facebook page) which makes a stunning quilt.
It has been a fun couple of months with lots of facebook interaction and support. Heather Spence has done an amazing job co-ordinating all this and with 330 participants has raised 3,300dollars which are going to Jacks parents to help with his medical bills.
I have already signed up for the Spring Mystery Quilt which starts on April 6th.
Heather is also running a New Years Day MQ with clues going out every hour for 6 hours. This time she is raising money to send sewing machines to women in Asia to help them become self supporting.
Here is a link to Heathers website
http://www.heatherspencedesigns.com/products-page/mystery-quilt/2013-new-years-day-mystery-quilt/
if you are interested in the New Years Day Quilt. I shall be away unfortunately. 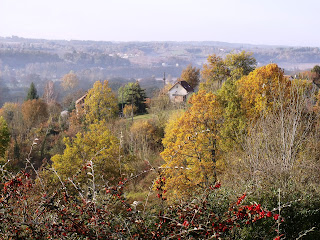 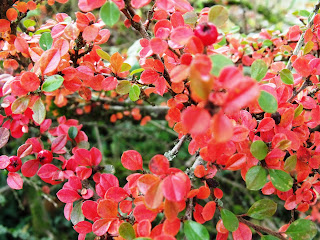 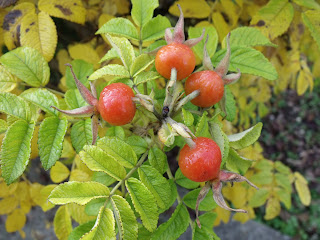 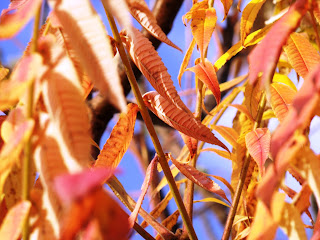 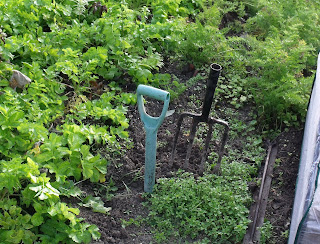 The result of some over exuberant digging! 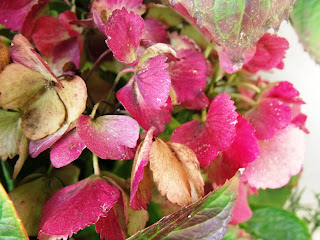 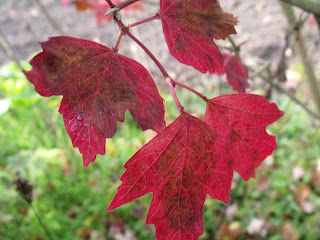 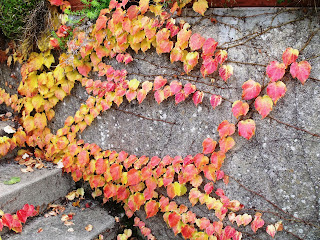 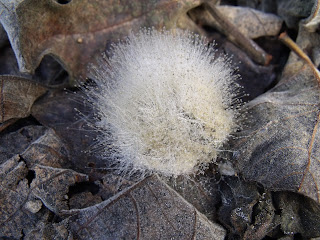 And this little beauty was once a fig!

Thank you for visiting - please leave a comment so I know you came by. 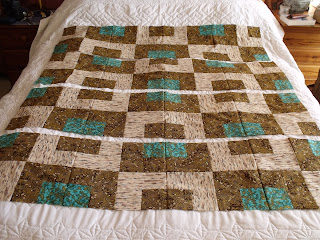 The blocks were sewn into rows for clue 5, complete, but a week late. Clue no 6 arrived before I had made a start on 5! Have now sewn the rows together - in the correct order and not as shown - now for the borders!
Lots to do though and I am still busy quilting my flying geese which has to be completed for Christmas, so a priority.
It's looking very autumnal here now - lots of colour in the trees and was hoping to get out with my camera but time has just disappeared again.
Have a good week.
Lin
Posted by Lin at 13:00 10 commentaires: 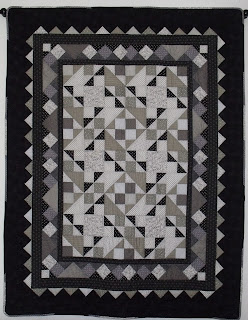 Earlier this year I made this mystery quilt from the Quilters Guild magazine 2000/2001. The reason I am sharing this with you now is that finally, today! the quilt was hung on the wall behind our bed, the place it was intended for.
At the time I had a large collection of grey, black and white fabrics which I needed to use and this seemed like the perfect project.
The clues for this quilt were given over 9 months - three issues of the magazine and at the time I was busy with other projects and so it got forgotten about. There was another MQ in 2004 and again in 2009.
In 2009 I thought, why not have a go? I encouraged a friend to join in and over the next year we independently made our quilts giving each other no clues about colours or how we were getting on. At the end we were both very pleased with the results - 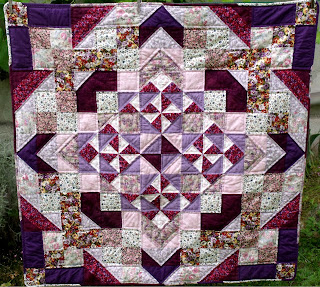 this is mine.
We soon followed up with the quilt from 2004 - 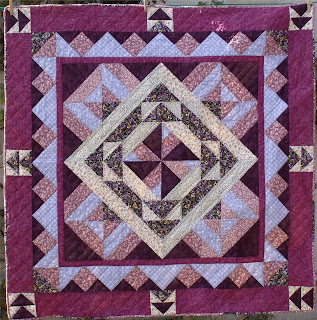 again, this is my version.
So of course, the original MQ from 2000 had to follow.

The Jack of Hearts MQ is very different.
Organised by Heather Spence Designs, the aim was to raise funds to help with the medical bills of a little boy called Jack who has a brain tumour. Amazingly 330 people have signed up and Heather has raised 3,300 dollars.
The clues have been coming one a week - today was clue no 5 - next week is the last one.
Everyone was invited to join a MQ facebook page and it has been great following every ones choices of fabrics, their results after each clue and lots of chat and fun along the way.
I have really enjoyed following all the MQ's  - it is interesting to see how your choices of fabric woks out and also making something that you may not have considered doing.
Thank you for reading this - until next time

Hello - I am Lin and I have been living in France for 25 years with my partner and now husband Philip. We have a small house, a large garden and an amazing view! I love to sew - patchwork, embroidery, mixed media, you name it I will give it a try! My main aim with my blog is to show you the work I am doing but every now and then I will show pictures of my travels or things that excite me in the garden. Thank you for taking the time to drop in and I look forward to receiving your comments.