In 1985 I was living in Rome and had been there for two years. I had started quilting in 1979 and completed my City & Guilds in Embroidery in 1983 as I left for Rome. Italy, I found, had not advanced as far as the UK in it's needlecrafts and finding materials was very difficult. Beautiful haberdashery shops but everything was hidden away in drawers so unless you knew what you were looking for and then what it was called in Italian you had no chance!
My lifelines to the world of P&Q were The Quilters Guilds newsletter from the UK and Quilters Newsletter Magazine from the US. In June 1985 the latest copy of QNM arrived just as I was looking for a new project. This page caught my eye. 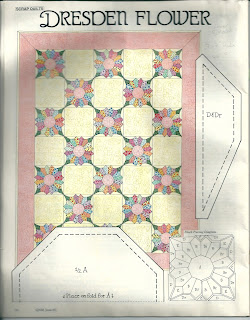 I had some fabrics left over from my previous project and I thought this would be a good way to use them up. Of course, I had to order some more and so  I sent off an order to Strawberry Fayre who even then were providing an excellent service for expats.
A year later I returned to the UK and the completed flower blocks were packed away and forgotten about as I returned to my C&G studies.
Fast forward now to France and around 2001/2 when I decided it was about time I did some more work on this quilt. I machined the blocks together and added a plain border and then, as I had planned a larger quilt than the one in the original design I started piecing an outer border. Again it all got stored away when I started work on a P&Q C&G course.
Two years ago I decided that it was time this quilt was finished so out it came again, the pieced border was added and it was layered up ready for quilting which I decided was a good way to ocupy my winter evenings. 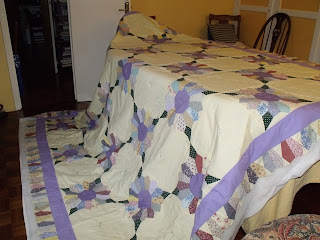 Now here we are with the finished quilt, 28 years later! 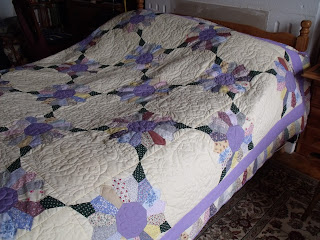 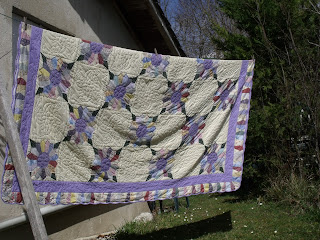 I wanted a quilt that covered a double bed with plenty of overhang so I made it square rather than the rectangle shown in the original pattern and also added a pieced border. 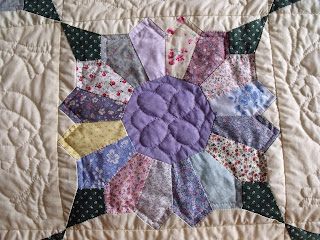 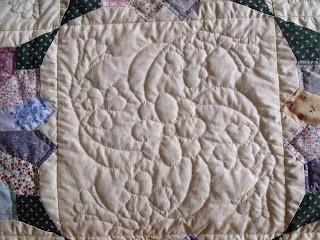 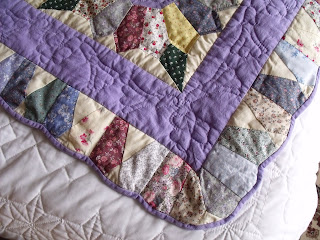 The quilting design I used is the one suggested with the pattern although I had to adapt it for the border which is smaller than the one in the original pattern.

The quilt is hand pieced with machine construction. Hand quilting with machine ditch quilting between the blocks and around the border. 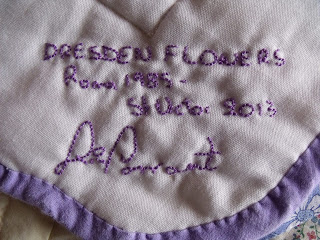 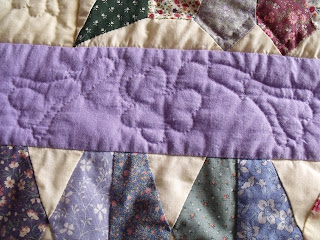 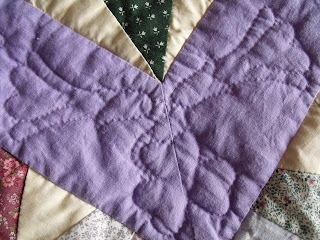 Looking through my machine threads when it came to adding the binding I found this reel of Sylko which was a perfect match. 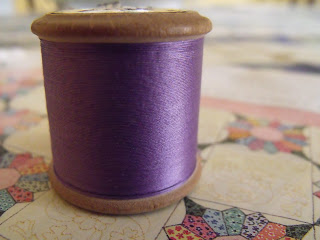 On a wooden reel, I am not sure how old it is but the sheen on the thread is still beautiful. I am trying to find out when Sylko was last sold on wooden reels. 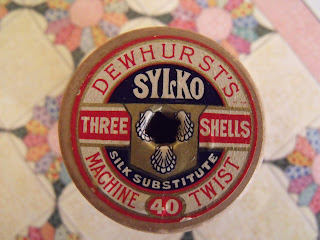 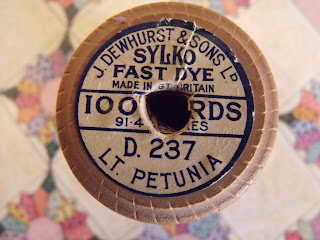 And I love the names given to all the colours - so evocative.

Thank you for stopping by.