A weekend away and a very 'pink' postcard!

While we were away at the weekend the postman left this beautiful postcard in our box. 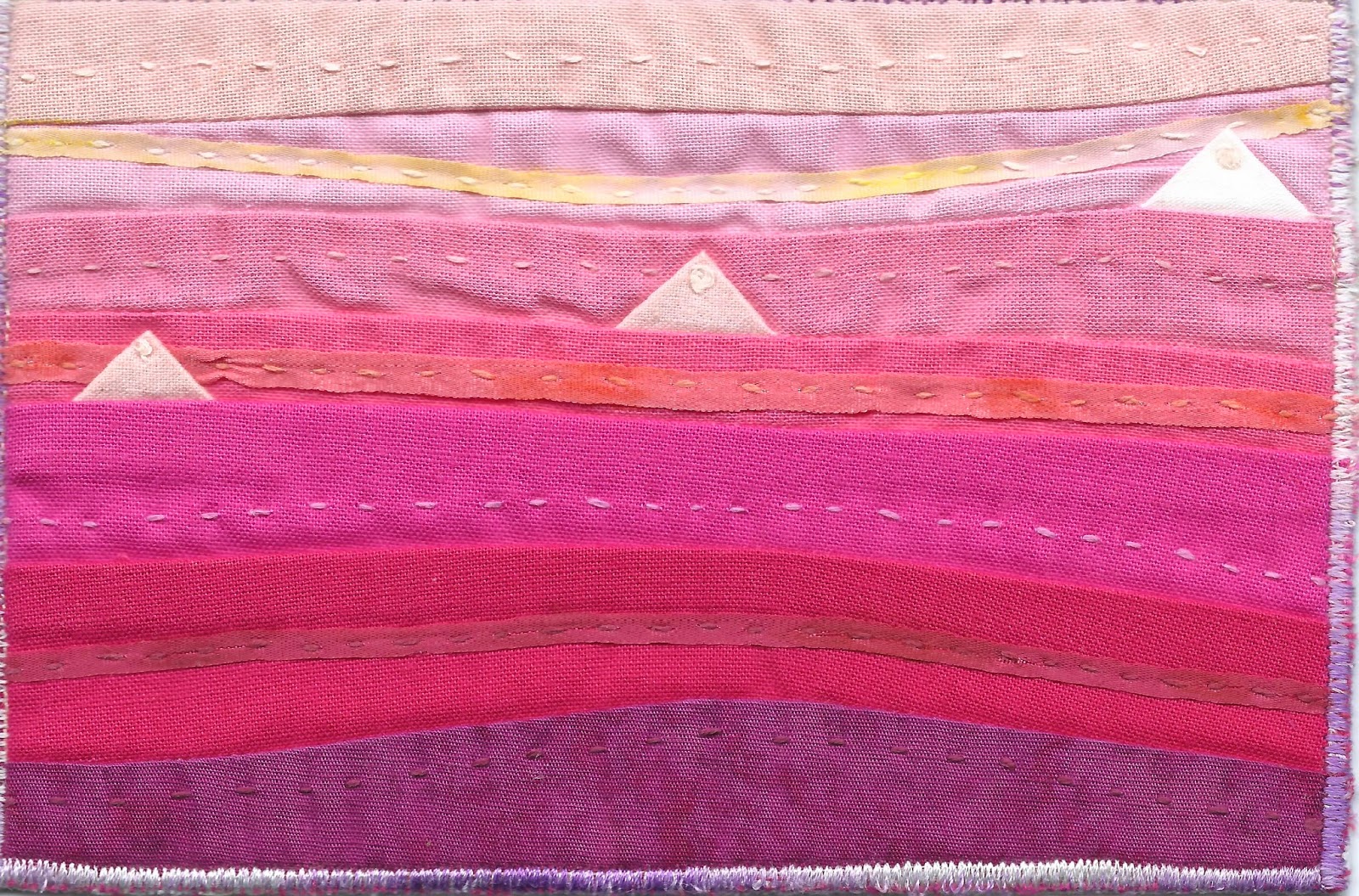 I love the colours!
The card came from Judy of knitquiltspinweave/fundamentallyfiber. She is doing a lot of work with solid colour at the moment so do go and have a look. But she also spins beautiful wool and then knits lovely socks with it! Thank you very much Judy.
Oops - I notice my scan has cropped some of the border stitching - sorry. xx

We have been to Marciac for the weekend which is about 4 hours south of here, almost in the Pyrenees. It is famous for it's annual International Jazz Festival now in it's 36th year.
We had tickets for Wynton Marsalis on Friday night so we left here early on Friday to be able to meander down and look at a few places on the way.

I loved the tiny town of Aignan. We pulled into the car park and I immediately spotted this sad building desperately in need of some tlc. Sad but beautiful especially with that lovely rose growing by it. We walked up the lane past this building and past a window from which came the most amazing cooking smells! masses of herbs I am sure, but then turning the corner into the square outside the house there was a little table and chair set up and a BBQ. 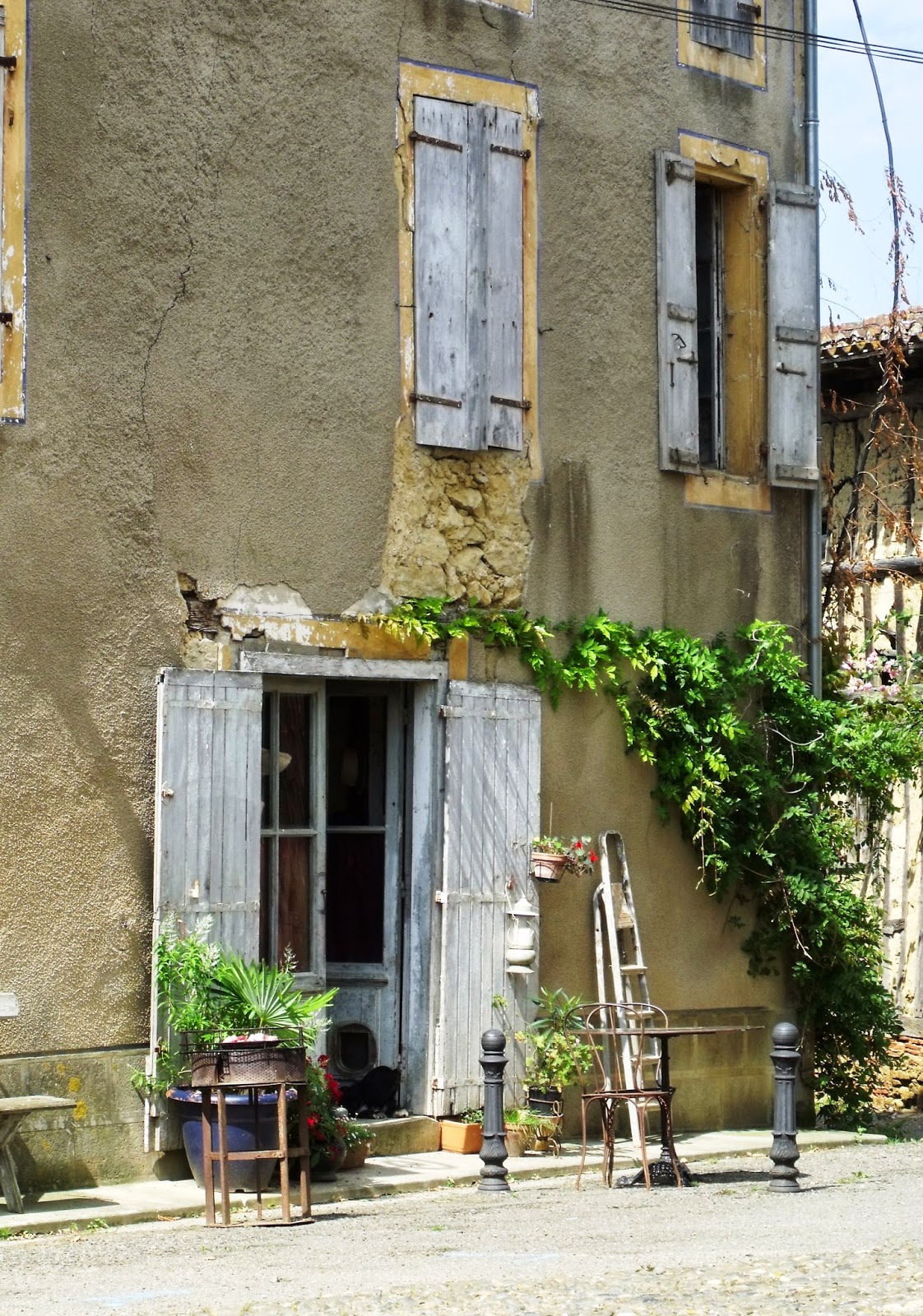 The BBQ is on the left in front of the blue pot - not easy to see but then I was taking the picture surreptitiously! The BBQ was not lit but on top of it there were some joints of rabbit - presumably defrosting! Also not in the picture is the little black dog that was rushing around nose to the ground. 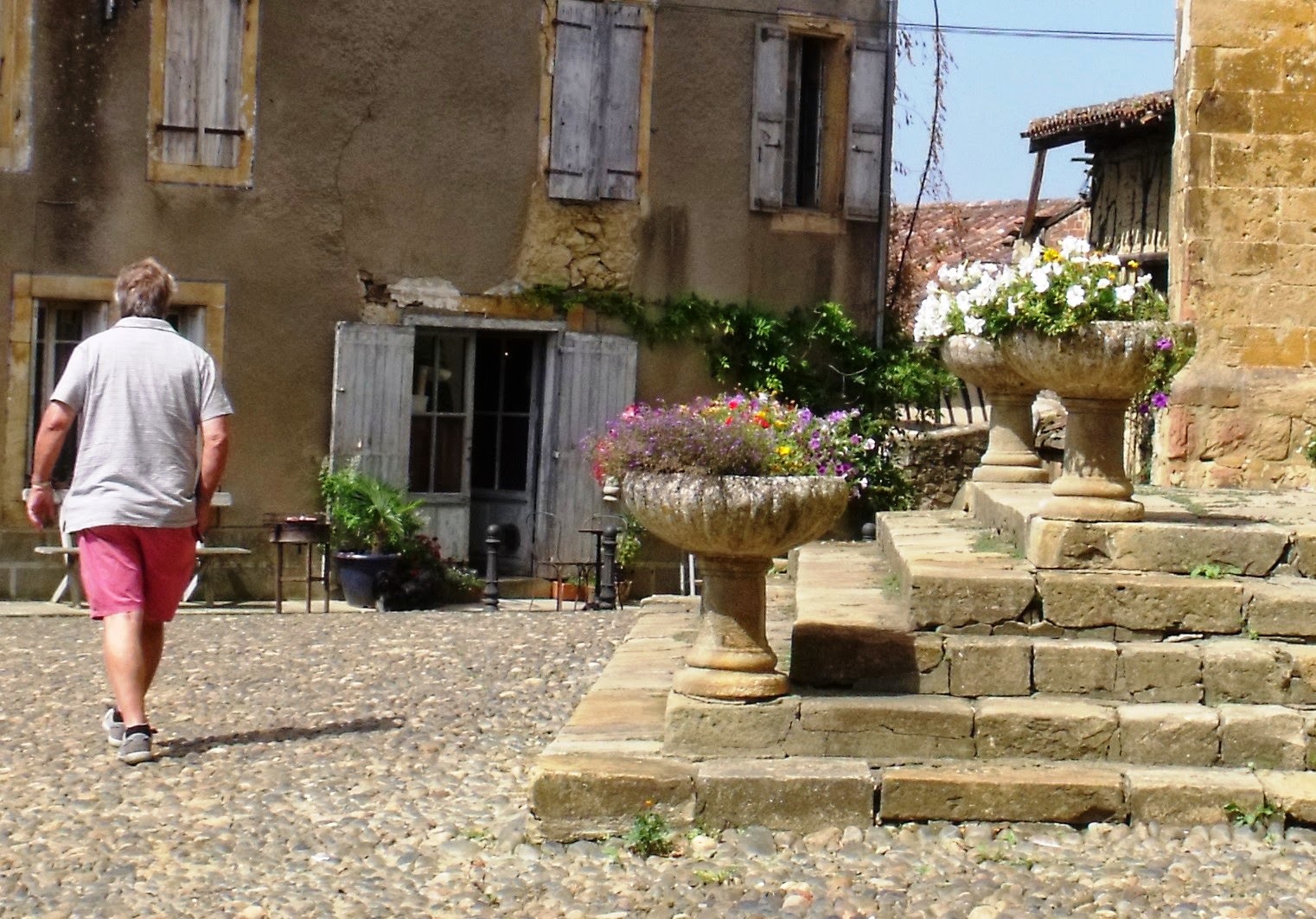 The house was right in the square by the church - here you can see the church steps with the house beyond.

We stayed in Maubourguet which is where one stage of the Tour de France started from and we met friends there who we spent the weekend with. Lots of evidence of le Tour around the town. 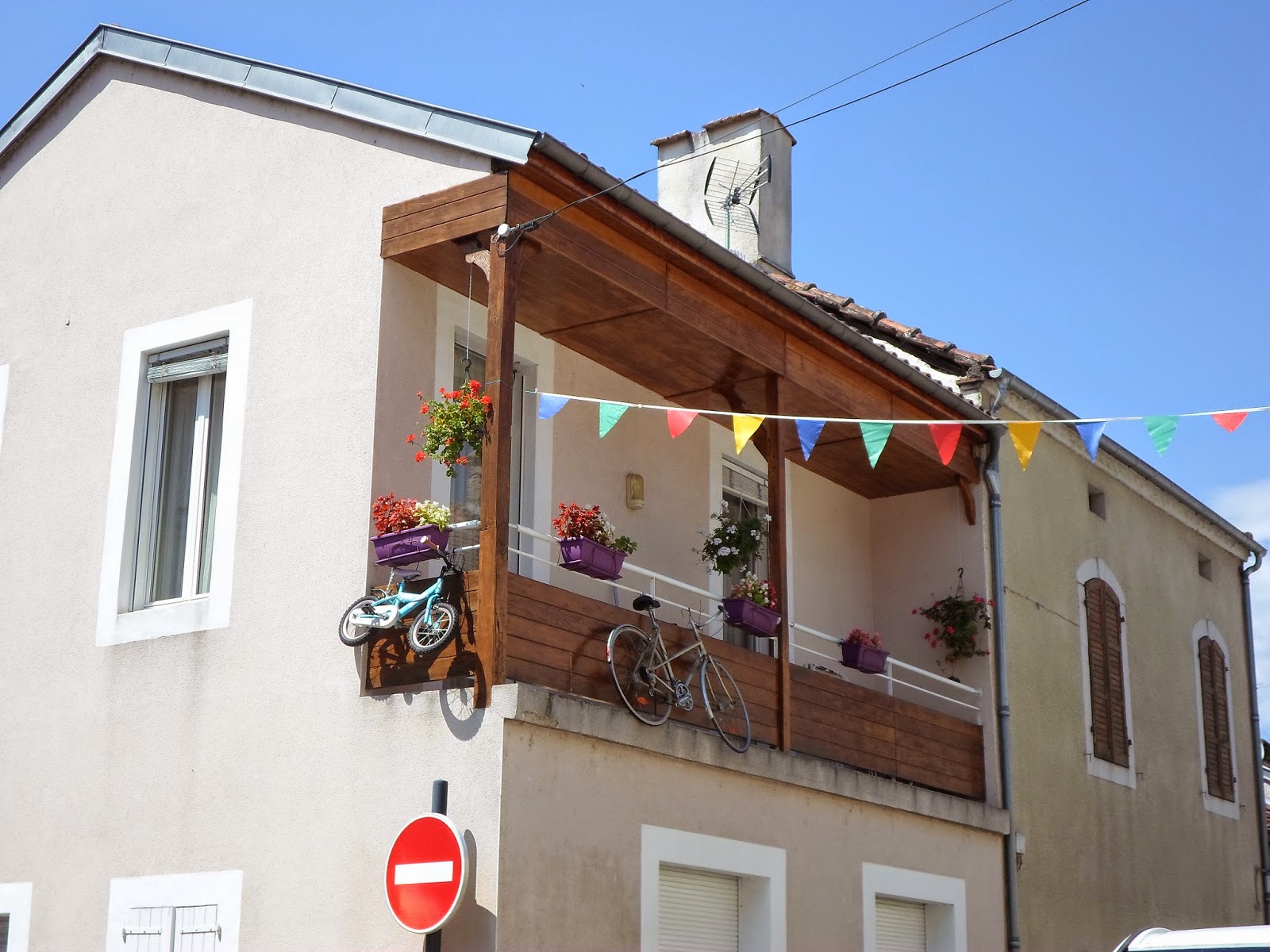 Marciac is a bastide town with a very large square at the centre. In the middle there was a stage where there were various jazz bands performing. Around it there were numerous bars, restaurants and stalls selling crafts, clothing wine, armagnac etc. The stalls were packed in and the whole place was crowded.
Our concert was at 9pm so at 7pm we found a restaurant for supper. It was a tent on the edge of the square so with access to the arched walkway of the bastide. Which was fortunate as there was a terrific storm while we were eating and all the sides of the tent came down in double quick time! I did manage to get this picture though of the unfortunate people across the square. 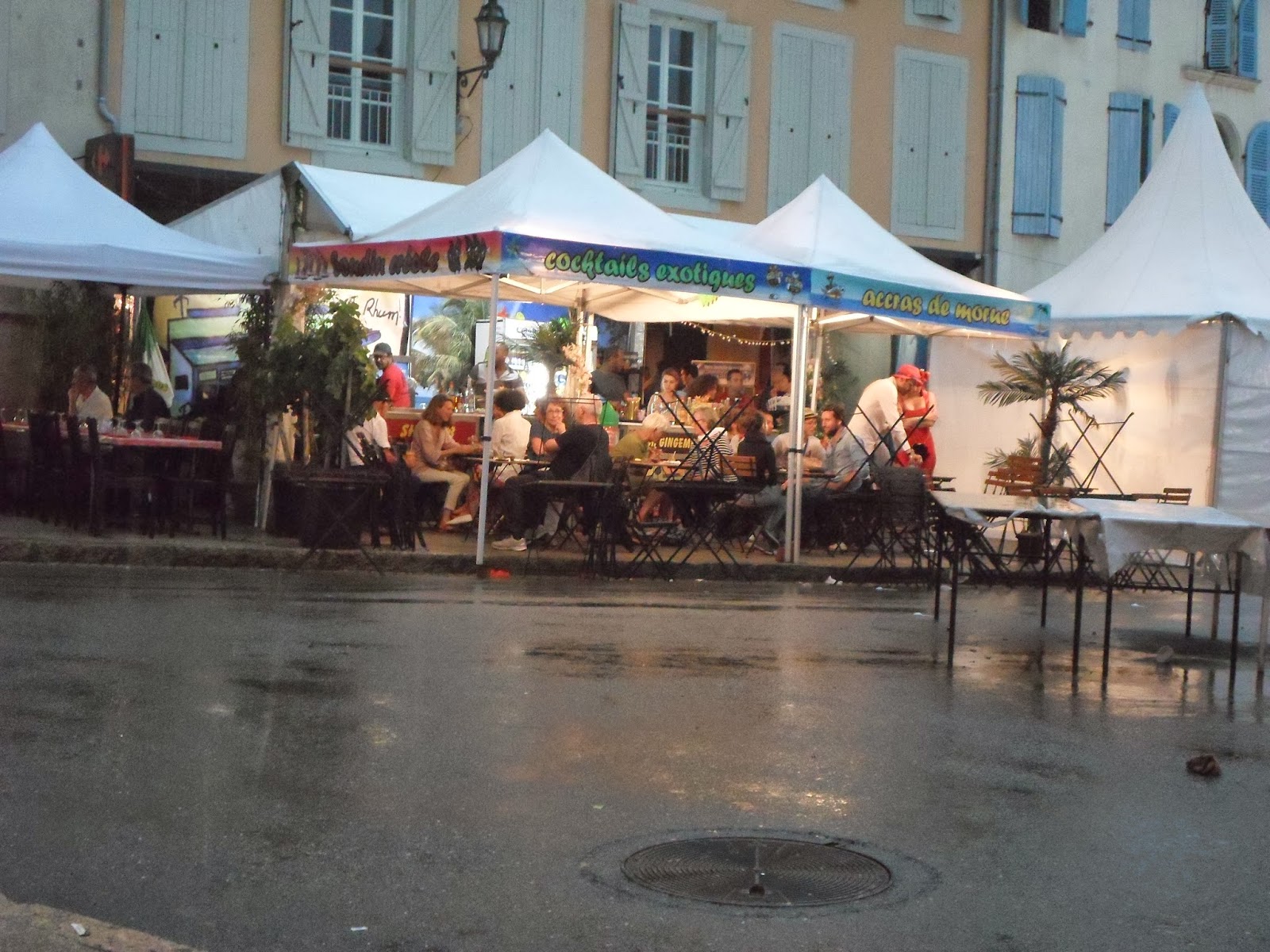 We were very fortunate though as we heard the next day that a town about 20 minutes away had suffered terrible damage to it's crops and vines and on our way home on Sunday we also passed an area that had obviously been badly hit by the storm.
The rain eased off in time for us to get to the 'Chapitau' - the huge tented concert hall. The first act was Kenny Barron then it was Wynton Marsalis who has a long association with Marciac and Richard Galliano  the accordionist and their tribute to Billie Holiday and Edith Piaf. A great evening.

On Saturday we spent a lazy day tasting wine at a local wine chateau - Madiran - and back at Marciac visiting the museum telling the story of the history of jazz and wandering around the stalls and the square.

On the way home on Sunday we stopped off at Auch. There is a lovely statue there of d'Artagnan - the real one as opposed to the one we all know from The Three Musketeers!


Tricky to get a nice picture of him without the crane that is helping with the restoration work of the spectacular staircase on which he sits! 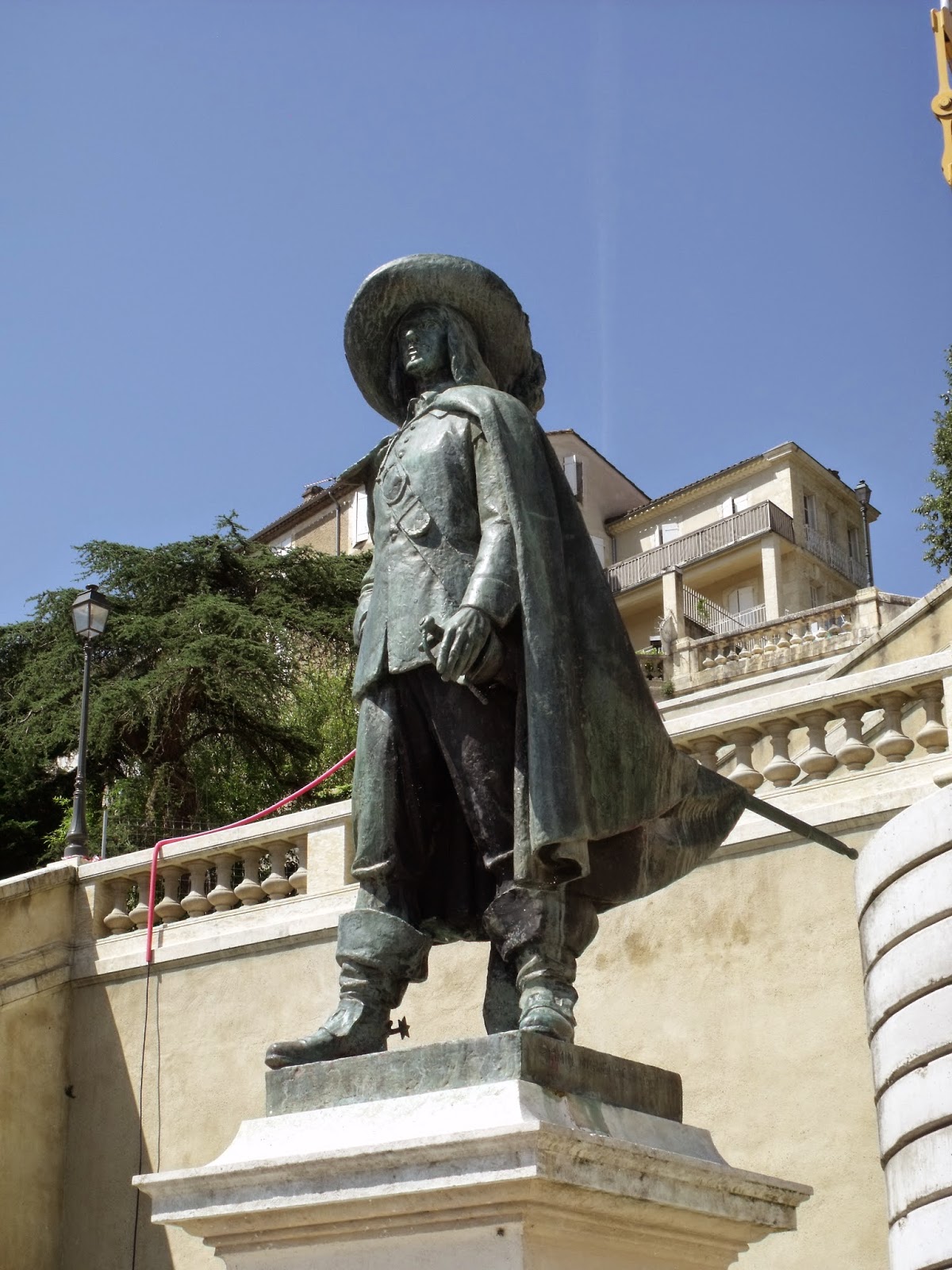 The cathedral in Auch is famous for it's Arnaud de Moles stained glass windows which are amazing for their detail. 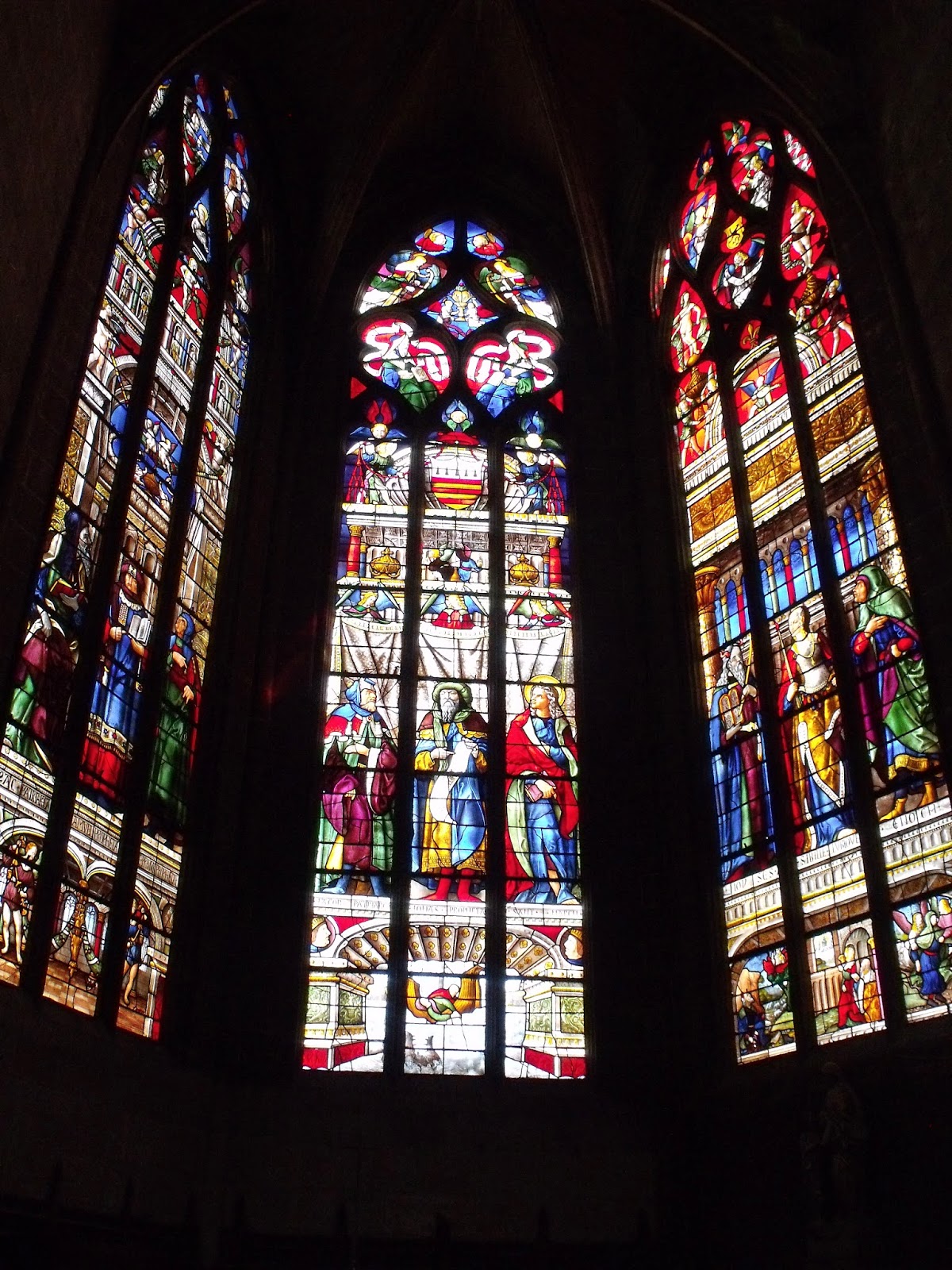 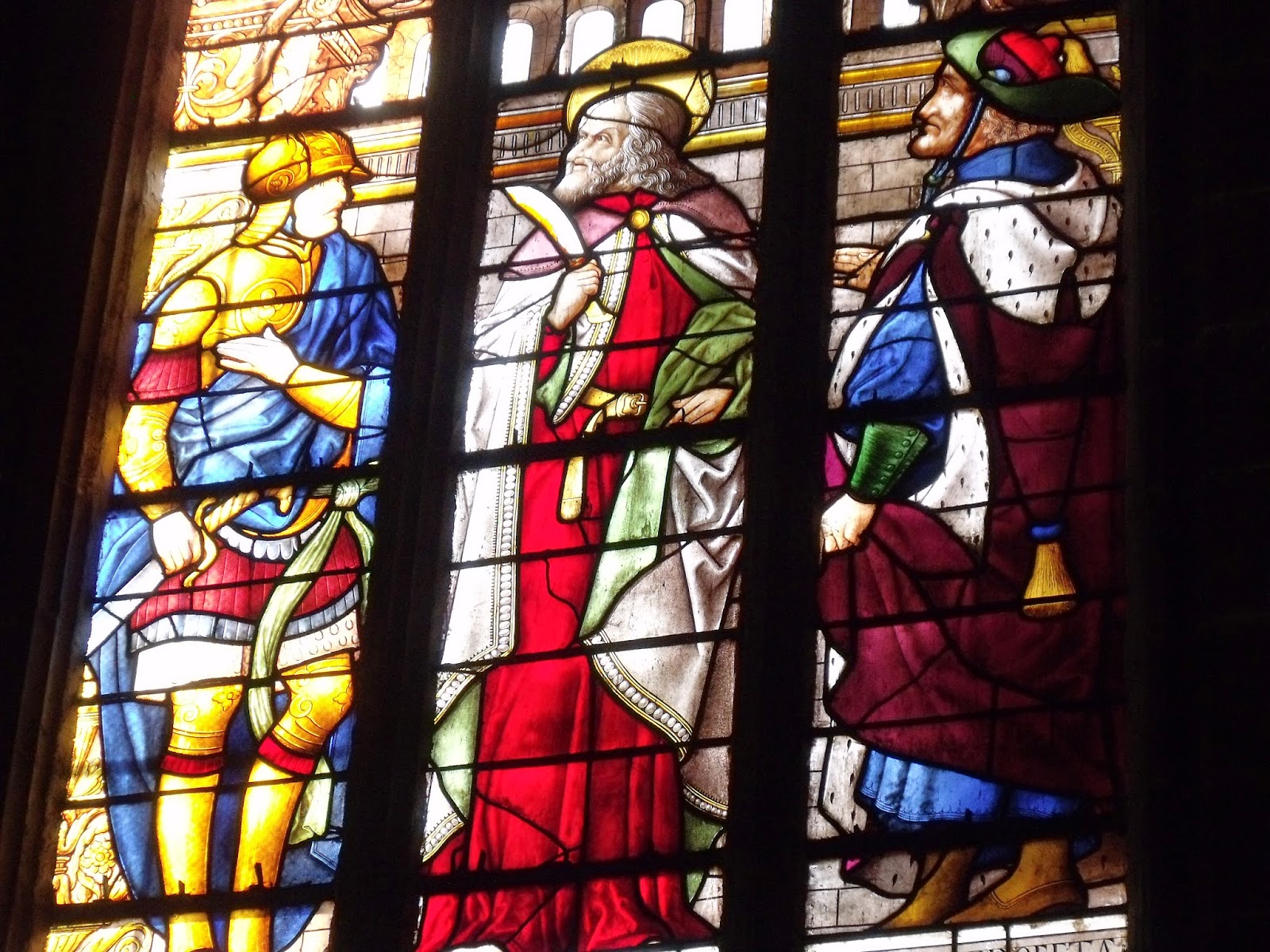 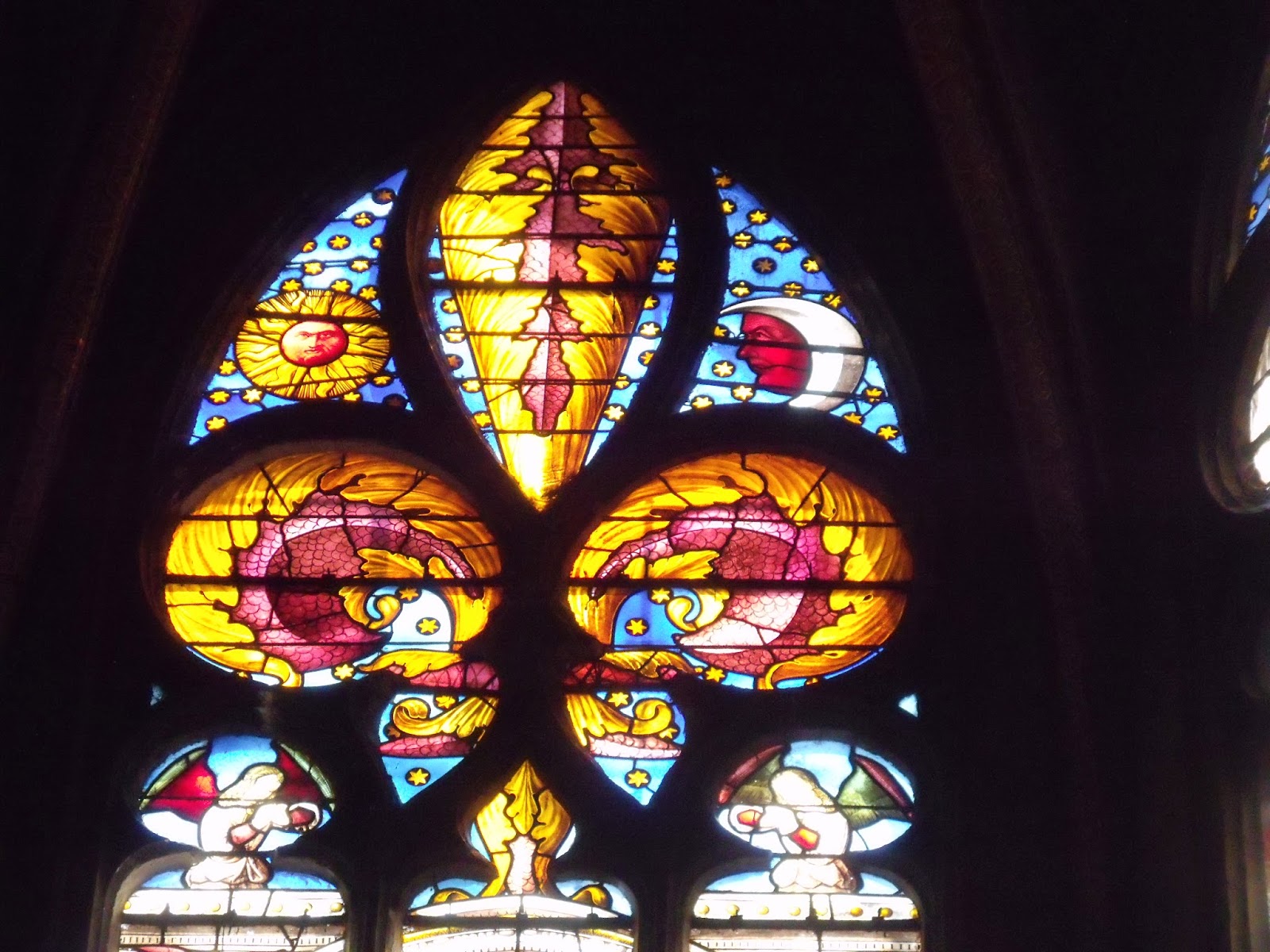 The Cathedral also has an amazing choir with beautiful oak carvings on the stalls and stall backs. 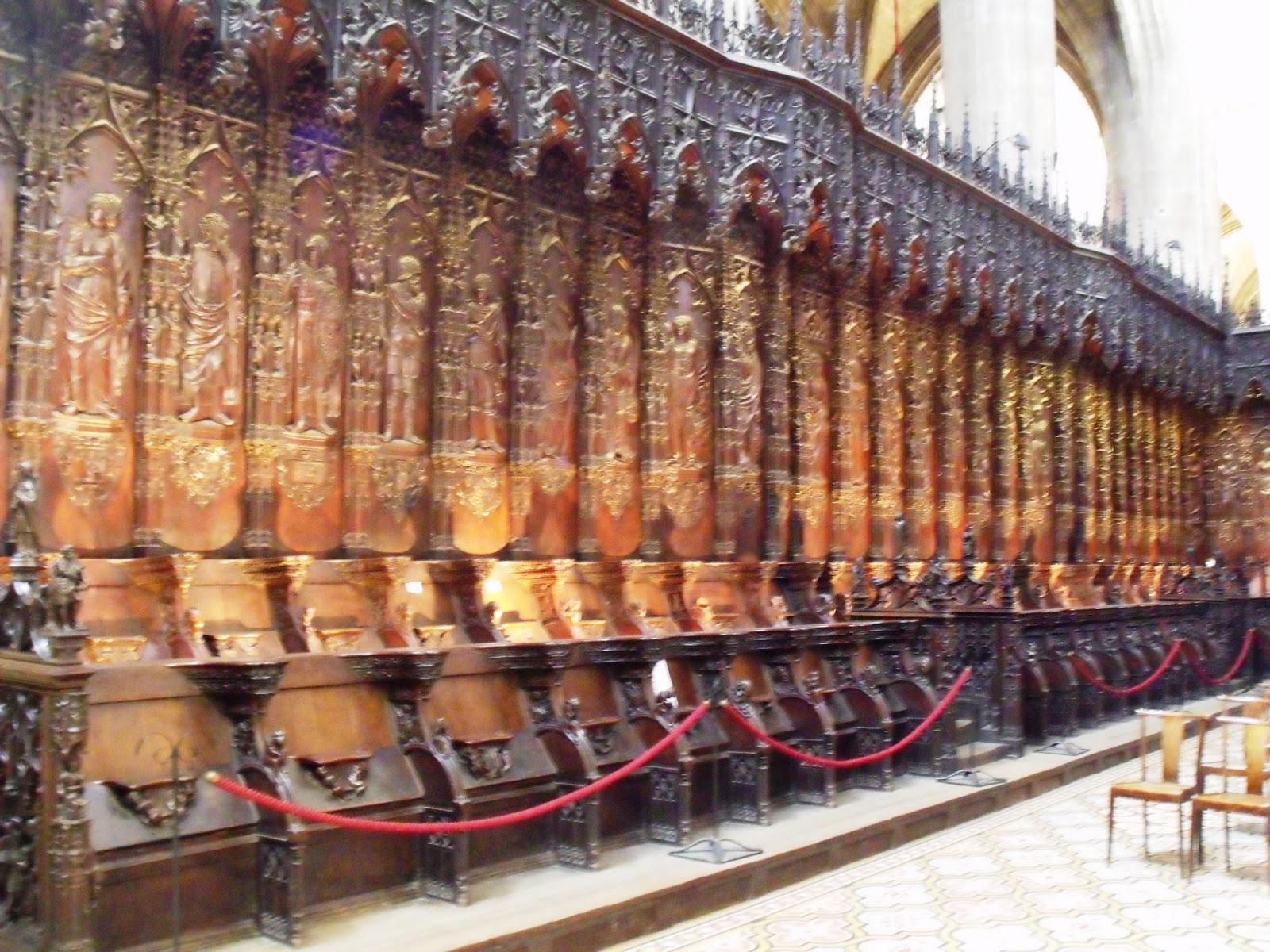 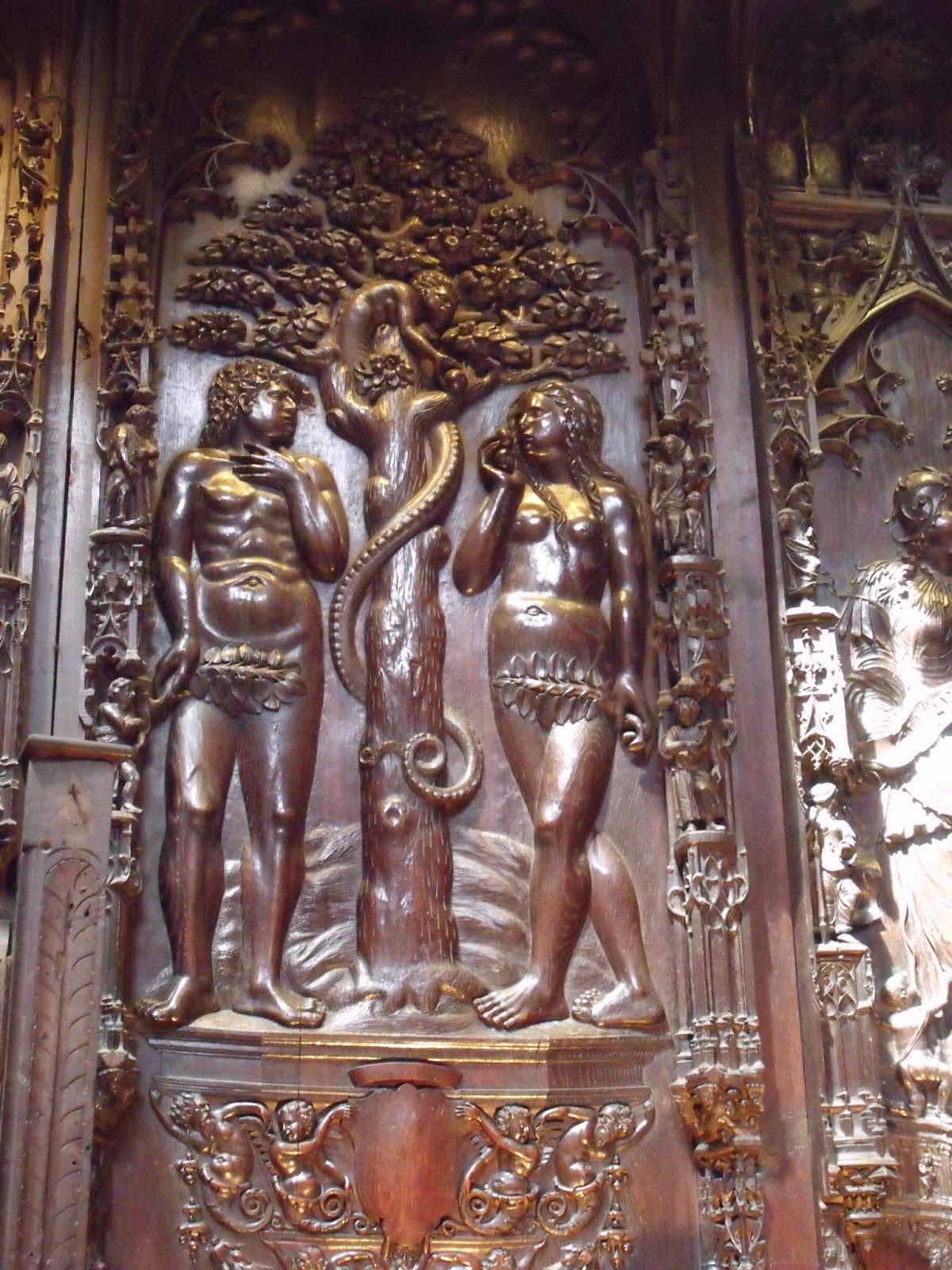 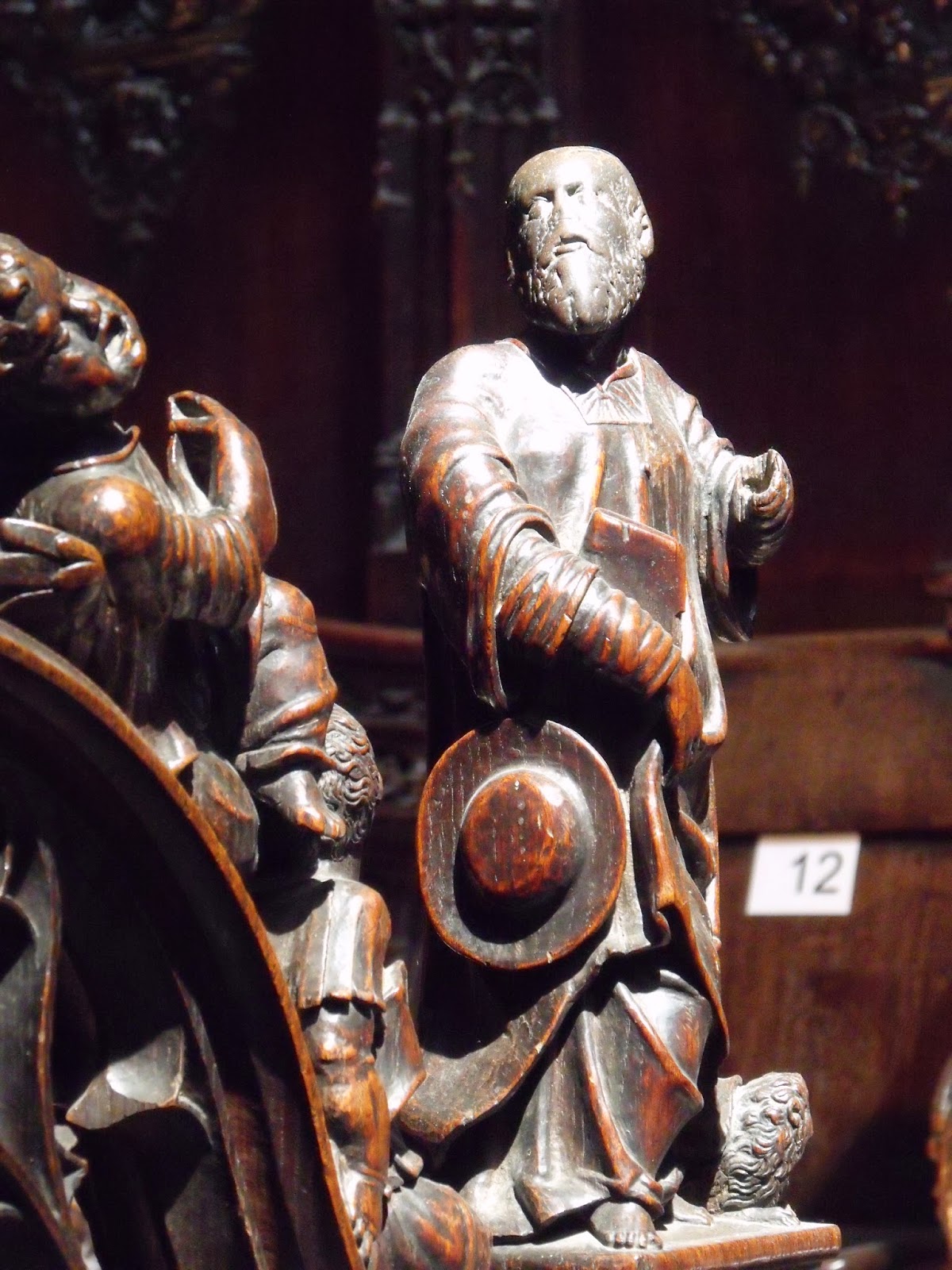 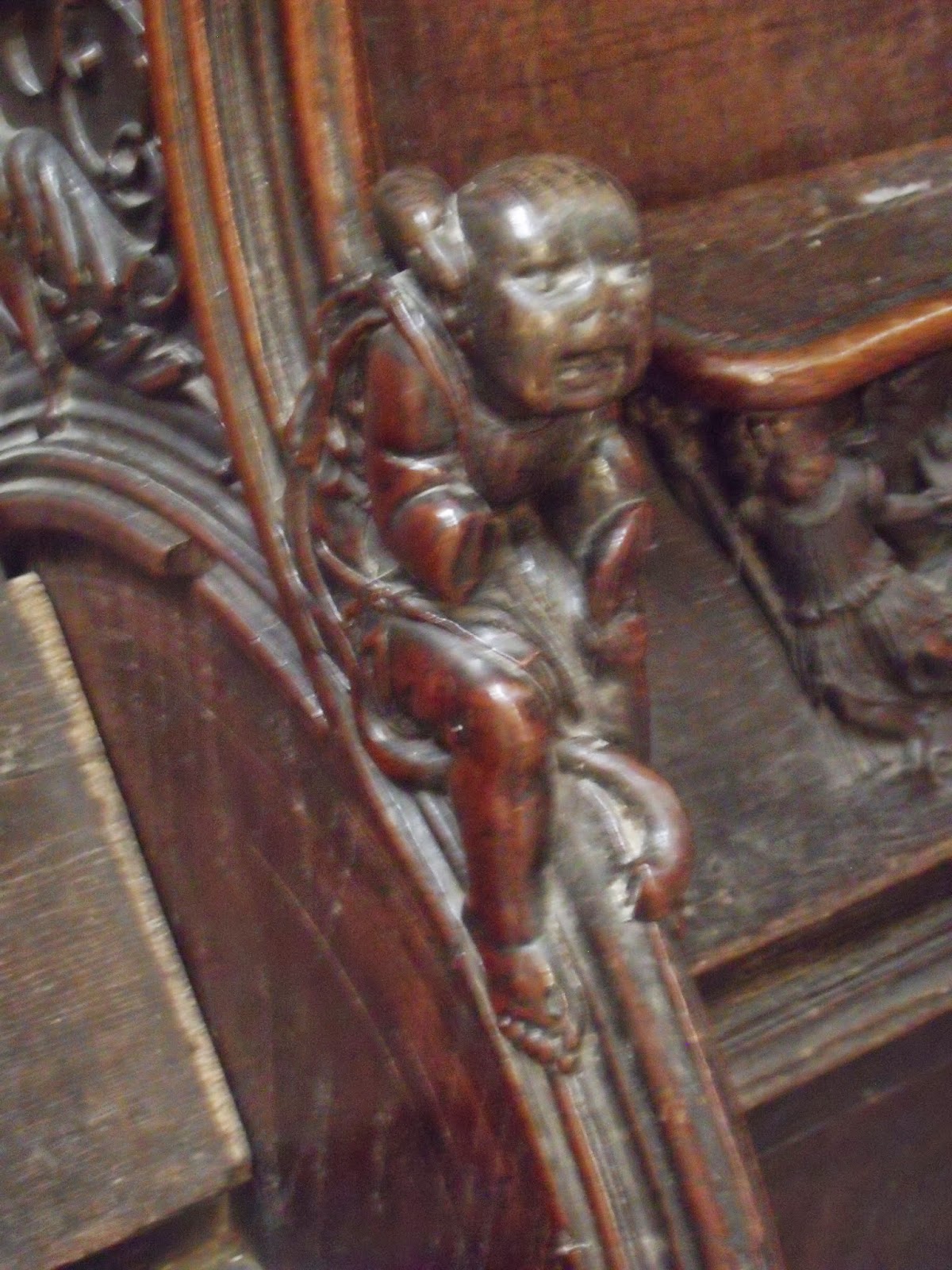 If you have made it to the end of this post then thank you for your patience and I hope you enjoyed the tour.
Posted by Lin at 21:27