A Few Days Away

We like to have a few days away in September. Usually it is cooler so we can leave the garden untended and most of our harvesting is done. Also September is the month for birds migrating south through France and so it is nice to go to the coast and maybe spot something unusual.

Last week we spent five nights on the Ile d'Oleron, an island on the Atlantic coast of France north of Bordeaux and south of la Rochelle. We last visited 15 years ago in May when it was quiet and windy. This time it was soooo busy! And hot too - we are in the middle of another heatwave, unknown in September. However we had a lovely time with comfortable and very quiet accommodation in the south of the island.

On our first day we visited la Cotiniere, a busy fishing port on the Atlantic side of the island and we sat for lunch by the smaller of the two ports. 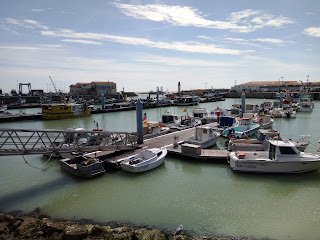 It was also busy with people - mostly 'older' as of course schools have gone back.

The next morning was cloudy and cooler and was in fact out best bird morning. We drove across Les Salines - the salt marshes - on a track after Philip thought he had glimpsed an osprey. He had and we saw four - this is the best picture evidence I am afraid as we saw them all through the telescope. They were resting up before continuing their long journey down to Africa. 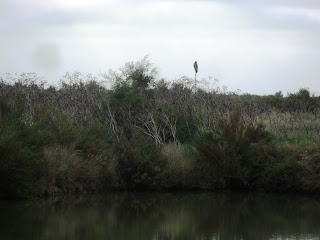 Lots of egrets around. We did though get a good view of the Viaduc (yes that is right, no t on the end) which is the islands link to the mainland. 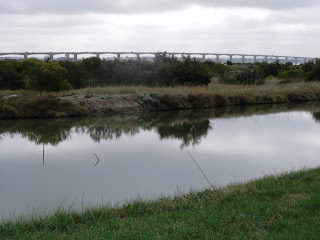 The salt marshes are of course used for the production of salt but the area is also famous for its oysters.

There were some lovely patches of colour between the different beds. 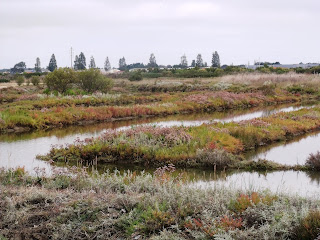 From there we visited St George in the north of the island which has this beautiful market hall. 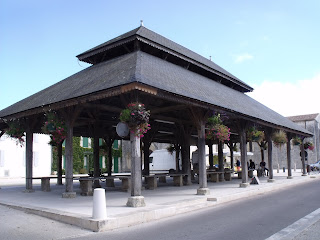 I am always fascinated by the beautiful wooden beams that hold up the roof in these structures - this is one that we saw at Cozes on the way home. 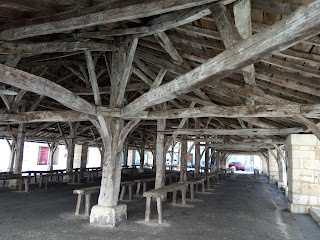 After lunching on a huge bowl of mussels at St Denis we decided to visit the lighthouse on the northern tip of the island. On our previous visit we spent some time there and climbed the stairs to the top. This time we just drove straight on past as it looked like a fun fair! The car park, which was nearly full, was vast, the footpath leading to the lighthouse thronged with people and lined with  touristy shops.

We drove on and found a stretch of wild coast which was beautiful and with a lack of sand, far less busy. 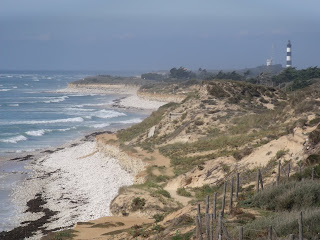 The next morning was bright and sunny so we were unable to find any osprey on les Salines but we did spot a sparrow hawk and a kestrel.

We went to the town of St Trojan which is on the southern tip of the island. A delightful place and by far my favourite. We stopped by the small fishing port and had a lovely wander. Many of the old fishermen's huts have been done up by the commune and during the summer are rented out to artists. We enjoyed visiting a few and walking out to a causeway which again had a splendid view of the Viaduc. 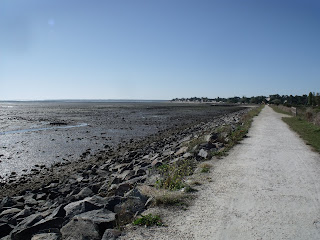 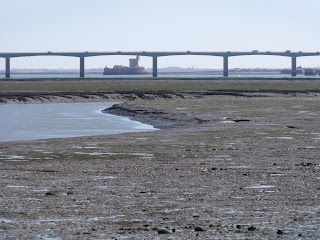 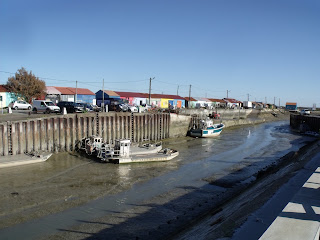 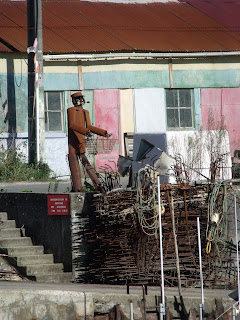 After another delicious fish lunch by the port we found a quiet spot near the sea to recover and then took a very pleasant walk along the sea wall.

The next day we met up with friends so had to take them to St Trojan for lunch and a wander round. We then went up the coast to show them the fishing port at la Cotiniere. It was early evening by then but oh so hot! 33 degrees and busy. Lots of people out walking along by the port and visiting the fish market and stalls. The range of fish was amazing.

The light on the boats in the harbour was beautiful. 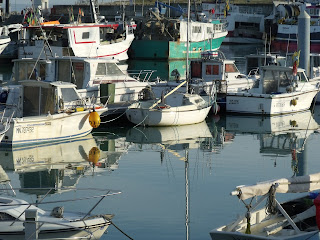 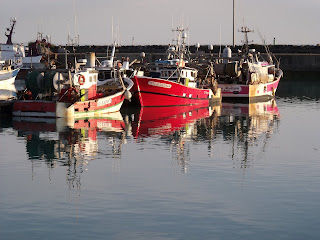 If you are still with me after all those photographs then thank you! I will share our last day in my next post.
Posted by Lin at 13:12