Friday Night Sew In for August

Good to be sewing again with virtual friends - thank you Wendy for getting us organised. Pop over to Wendy's blog here to see what everyone was working on.

I spent a little while on the computer first of all. I mentioned in my last post that I am researching all things spiral for a new sketchbook. So I am starting with the very earliest known man made spiral which is this Triskelion or Triskele from Newgrange in The Republic of Ireland. 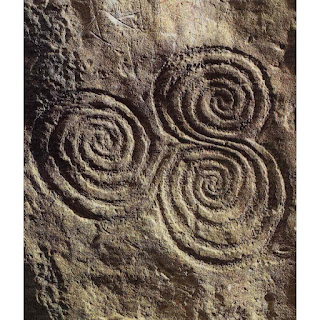 This symbol was carved over 5000 years ago into the wall of the burial chamber, at the end of a long passage. It was positioned so that during the winter solstice the suns rays would stretch along the passage and illuminate the symbol. The symbol has been used elsewhere including on this Mycenaean vessel 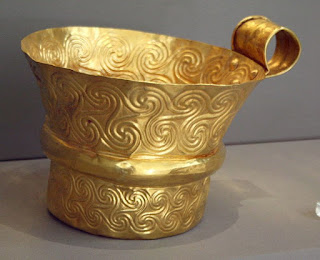 and carved into rock in Galicia in Spain. 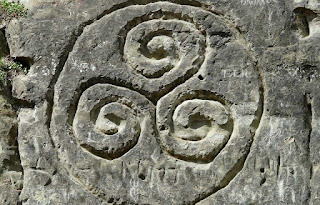 These spirals are related to the three legged Tiskelion or Triskeles which can be found in Ancient Greek art, coinage, on the flag of Sicily and as the symbol of The Isle of Man.
OK folks, culture lesson over for the day and yes I did get some sewing done! Quite a lot of quilting on my tablecloth actually as there was a fairly boring football match on TV. I just have one side of the tablecloth to quilt now. 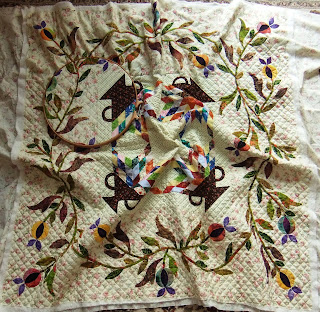 Not easy to photograph but you should be able to make out that the top edge is unquilted.
Right, I am off to visit a few fellow FNSIers.
Have a good week.
Posted by Lin at 12:58